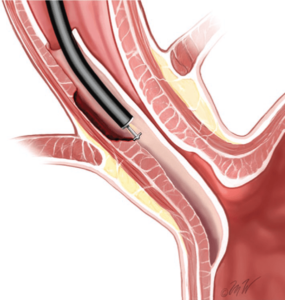 Motor disorders of the esophagus present a rare but serious challenge. But experience with Per-Oral Endoscopic Myotomy in the comprehensive esophageal practice at the Lung Center at Brigham and Women’s Hospital is showing benefits for its initial use in achalasia and for other motor disorders.

Jon O. Wee, MD, the section chief for esophageal surgery and co-director of minimally invasive thoracic surgery in the Division of Thoracic Surgery, was an early adopter of POEM and one of the first in New England to perform the procedure. He has performed more than 60 POEM procedures at Brigham and Women’s since 2013.

POEM’s development began in the early 2000s to treat esophageal paralysis and failure of the lower esophageal sphincter to relax – characteristics of achalasia, which affects approximately 1 in 100,000 people. Initial symptoms (heartburn, hiccups and chest pain or pressure) may progress with devastating consequences, as food is unable to move comfortably into the stomach, leading to dangerous dysphagia, regurgitation and choking. Achalasia is caused by loss of nerve cells that control swallowing and occasionally by a tumor.

Japanese pioneer H. Inoue, who named the procedure, performed the first endoscopic myotomy for esophageal achalasia in 2008. Increasingly, Dr Wee said, the endoscopic POEM procedure is being chosen as an alternative to the laparoscopic esophagomyotomy (Heller myotomy), the gold standard treatment for achalasia, which uses a laparoscopic abdominal approach to cut the muscle fibers around the sphincter. POEM is now also considered a first-line treatment, said Dr. Wee, who performs both procedures.

“POEM is less invasive,” said Dr. Wee. “Patients are able to resume their normal activities more quickly, usually within a couple of days, as opposed to a few weeks for the Heller procedure.”

Heller versus POEM: Different Approaches with Similar, but Not Identical, Results

A recent meta-analysis shows POEM results to be as good as, or slightly better than, the Heller myotomy for relieving dysphagia, but without scarring. Recent systematic reviews also suggest one downside of POEM:  a small increase in reflux disease. These findings, particularly improved dysphagia scores, are consistent with Dr. Wee’s own patient data, he said.

POEM also may be a better option than Heller myotomy for patients with a prior myotomy or upper abdominal surgery or who are obese or elderly.

For POEM, after a patient is anesthetized and intubated, a small incision is made on the inside of the esophagus, and the scope is burrowed into the submucosa. The submucosal tunnel is extended as far as possible into the esophagus and stomach, and the muscle is gently dissected. Clips are used to close the mucosal incision. By avoiding a surface incision, innate structures of the esophagus, hiatus and diaphragm are not disrupted.

Other non-surgical treatments, such as dilation and botulinum toxin injection, may decrease effectiveness and long-term outcomes of both Heller and POEM myotomy, which adds to the rationale for using POEM as a first-line treatment for patients who want to avoid surgery, said Dr. Wee.

Benefits of Thoracic Expertise at the Lung Center, with GI Collaboration

In recent years, POEM has been adopted by gastroenterologists as well as thoracic surgeons. But because it requires general anesthesia, Dr. Wee recommended that POEM be performed within the safety of an operating room.

At Brigham and Women’s Hospital, the procedure is done in state-of-the-art thoracic surgical suites with anesthesia and nursing staff who specialize in thoracic surgery. Patients recover in the Lung Center’s thoracic intermediate care unit (TICU), with clinicians who are dedicated only to lung patients. Close collaboration with the hospital’s Division of Gastroenterology, Hepatology and Endoscopy ensures optimal decision-making and patient care.

“We are a comprehensive thoracic program with expertise to treat all thoracic diseases including those of the esophagus. This provides patients with a comprehensive approach to treating the entirety of the disease process including access to immediate and appropriate treatment for any complications and issues that may arise,” Dr. Wee said.

Many, but not all, insurers reimburse for POEM. Even so, use of POEM is accelerating, Dr Wee said, due to the strength of multiple studies showing its benefits. Dr. Wee and colleagues train the Brigham’s fellows and residents in the technique.

“The use of POEM is becoming more common for achalasia and certainly the indications are expanding for it. So there may be more opportunities to utilize the technique,” he said.

One reason for POEM’s good outcomes, said Dr. Wee, is the ability to achieve a longer and better cut on the muscle with POEM than with the laparoscopic approach. This makes it possible to help patients with other motor disorders of the esophagus who previously had few effective treatment options.

“POEM has shown to be more effective in certain esophageal disorders that typically we didn’t have a good surgical option or treatment for,” said Dr. Wee. “For most motor disorders of the esophagus, there’s no medical treatment that’s really that effective. But as we’re gaining more experience with this particular procedure, we’re finding that conditions such as diffuse esophageal spasm, nutcracker esophagus and spastic achalasia (type III) seem to be better treated with this POEM approach.”

“Sometimes you need a longer myotomy, which is why it’s maybe more appropriate for spastic disorders of the esophagus because you can get a better, longer cut in the muscle than you can with the Heller approach,” he said. “We haven’t previously recommended surgery for some of these conditions. But with the POEM technique, there certainly may be opportunities for these patients to get a better result.”