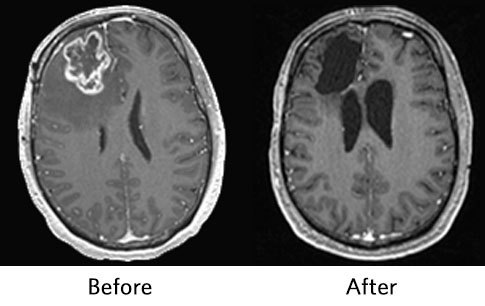 A new study featured on the cover of the March issue of Nature Medicine offers hope for treating patients with glioblastoma. In a small randomized controlled clinical trial, patients with recurrent glioblastoma lived nearly twice as long if they received an immunotherapy drug prior to and following surgery, compared to patients who only received the drug after surgery.

Patrick Y. Wen, MD, director of the Center for Neuro-Oncology at the Dana-Farber/Brigham and Women’s Cancer Center, was co-senior author of the paper. Dr. Wen worked in close collaboration with first author Timothy Cloughesy, MD, and Robert M. Prins, PhD, both of the University of California at Los Angeles (UCLA).

Despite initial optimism about using checkpoint inhibitors in glioblastoma, subsequent studies showed the tumor does not respond well to this type of immunotherapy. Dr. Wen and his colleagues initially undertook their study to see how administering pembrolizumab (Keytruda) to about half of the 35 patients before surgery would affect the tumor microenvironment. Pembrolizumab is an antibody that blocks the PD-1 immune checkpoint, which frees immune T-cells from constraints so that they can attack cancer cells more effectively. 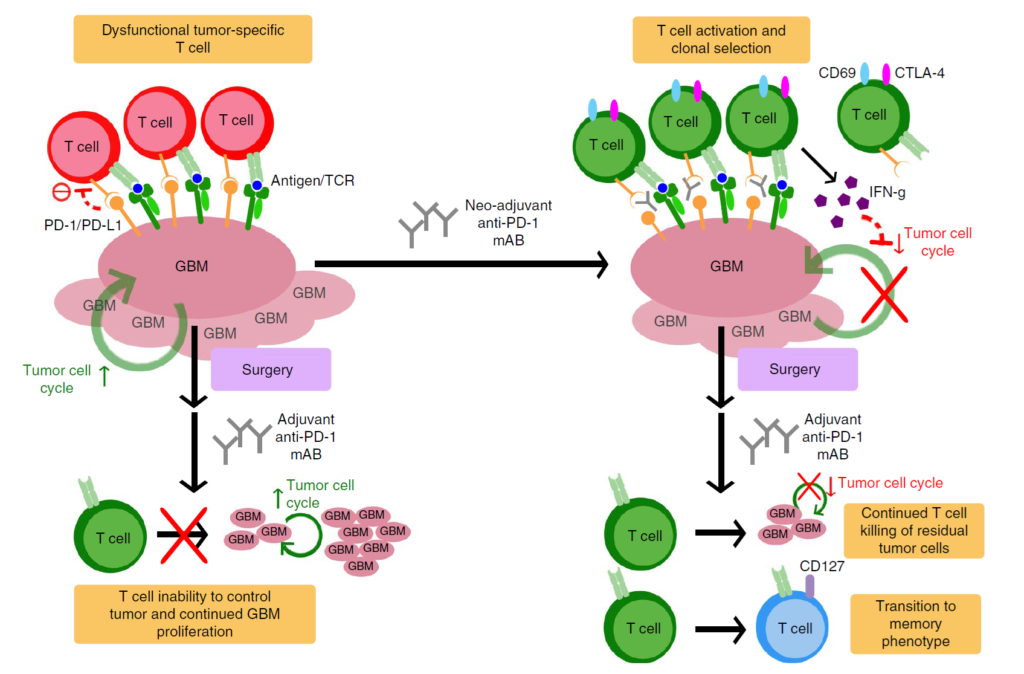 “The results were completely unexpected because everything up until now suggested immunotherapy wasn’t working against glioblastoma,” Dr. Wen said. “At first, we thought the randomization wasn’t balanced. But we looked at every possibility that could affect prognosis, and the two groups were very equal.”

Why might the timing of immunotherapy improve survival so dramatically? Dr. Wen is not yet sure but does have a hypothesis.

“The immune environment in glioblastomas is very immunosuppressive — up to 40 percent of the tumor consists of macrophages and microglia,” he said. “There are small numbers of T lymphocytes directed against tumor cells, but they cannot function properly in the immunosuppressive environment. By administering pembrolizumab pre-surgery, you activate the T lymphocytes, and by removing most of the tumor, including the cells that suppress the immune system, the T-cells can do what they’re supposed to do and kill the tumor cells.”

Dr. Wen added that by lengthening the tumor’s exposure to pembrolizumab, presurgical administration might also give the body more time to generate an effective immune response.

While the study had just 35 patients, it has generated considerable excitement in the oncology field. Dr. Wen noted that similar clinical studies administering PD-1 antibodies before surgery in lung, melanoma, and head and neck cancer have shown promising results as well, which supports the notion that the improvement in survival may well be no fluke.

The investigators are in the process of adding 25 patients to the trial, all of whom will receive neoadjuvant pembrolizumab, to see if the original results are replicated. The protocol is now awaiting IRB approval.

Dr. Wen and his colleagues from UCLA would like to conduct more trials evaluating various combination therapies in glioblastoma using this surgical paradigm. For example, they hope to eventually do a registration trial in recurrent glioblastoma, in which one group would receive pembrolizumab before surgery and the other group would get standard of care and surgery.

Also under consideration: a trial in which upon diagnosis, patients suspected of glioblastoma would receive pembrolizumab before surgery. “That’s probably when we’d have the biggest bang from any treatment.” Dr. Wen said.