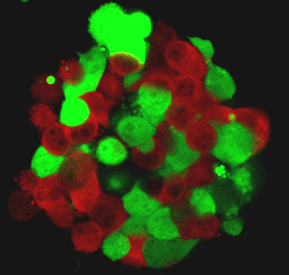 To address the challenge of glioblastoma (GBM) recurrence and treatment resistance, a research team from Brigham and Women’s Hospital has reported success using a novel method to co-opt the tumor cells’ molecular machinery. The result makes the tumor more vulnerable to treatment. By delivering molecules that modify gene expression in the tumor, investigators have shown a significant survival benefit in a mouse model of GBM.

“We coax the tumor to produce its own poison, then we hit it for good with chemotherapy or radiation,” said neurosurgeon and researcher Pierpaolo Peruzzi, MD, PhD, of Brigham and Women’s Department of Neurosurgery, and corresponding author of a report in the January 25 Nature Communications. “We’re optimistic that in a relatively short time we can advance this approach to the clinic.”  Peruzzi also is a principal investigator in the hospital’s Harvey Cushing Neuro-Oncology Laboratories.

The strategy begins with microRNA, the tiny strings of nucleotides that are churned out within cells. While preclinical studies have found that microRNAs play an important role in cancer and other diseases, two cancer clinical trials to date that used microRNAs showed little response and significant toxicity.

Peruzzi and colleagues took a different approach by seeking groups of microRNAs responsible for regulating complex pathways in GBM growth. Using bioinformatic analysis, the researchers focused on three microRNAs that exist naturally in the brain. The research team found that miR-124, miR-128 and miR-137 work as a team in healthy neurons, but they are lost during formation of brain cancer. Targets of these microRNAs included proteins involved in glioblastoma recurrence and resistance, the researchers found. “The resilience response is mediated by not one gene, but by many. That is why just one drug doesn’t work,” said Peruzzi.

The investigators tested the findings in GBM and non-GBM cancer cell lines. They also developed a strategy to encode a cocktail of these microRNAs within a small artificial gene, which was easily delivered to intracranial GBM in mice. Mice without treatment survived 12 days post-tumor implantation, the team reported. Chemotherapy extended this to a median of 18 days. But chemotherapy combined with multi-microRNA treatment extended survival to a median of 48.5 days.

Creating and Delivering a 2.0 Gene to Weaken the GBM Tumor

To transfer the microRNAs, the investigators used a viral vector. One important factor in the research, said Peruzzi, is that “these microRNAs are so small and easy to manipulate that you can put several together to create a 2.0 gene that can produce a lot of destabilization within cancer cells.”

A second key factor of the multi-microRNA strategy is that it weakens tumor cells, rather than killing them outright. “While it seems a bit counterintuitive, this actually is an advantage. By remaining alive, though severely impaired, cancer cells continue to produce microRNAs. And these eventually flood the entire tumor,” Peruzzi said. “I think of it as hitchhiking. Cancer cells have a built-in system to produce and recognize microRNAs and we’re getting them to ‘pick up’ our sequence—which encodes multiple microRNAs—and start making more copies of them. The cellular machinery is running, and our sequence is along for the ride.”

A third factor makes possible the rapid and widespread distribution of the microRNAs. Extracellular vesicles that are generally associated with waste removal act as a conduit for spreading the microRNA throughout the tumor. (The accompanying image shows an in vitro model for glioblastoma using two different cell types — green and red — to study the passage of microvesicles and microRNAs from the green cells to the red ones.)

From Bench to Clinic

“These results are very encouraging and may provide a realistic treatment option,” said lead author Vivek Bhaskaran, PhD, a postdoctoral fellow in the Department of Neurosurgery. The investigators envision this innovation as an adjunct to current therapies, not a replacement. Patients would still undergo resection, during which the gene therapy would be delivered. In subsequent weeks, while the patient is healing, the microRNAs would spread and weaken the tumor, priming it for chemotherapy, radiation or immunotherapy.

“The goal is to see what we can do in this window to maximize the therapeutic benefit of the standard intervention,” Peruzzi said. “This paralyzes the tumor’s ability to respond in the usually-evasive way.”

To date, no toxicity has been found, Peruzzi added, because the micro-RNAs are normally expressed in healthy brain cells.

“If this works in the ideal way, it is expected to strongly prevent recurrence. Whatever is left over would be so impaired in ability to respond to chemo or radiation, the cells would just die,” Peruzzi added. “Or, it would take a significantly longer time to recur.”

The concept, he said, could apply to other tumor types, as long as the appropriate microRNAs for that tumor can be identified. Medulloblastoma, diffuse intrinsic pontine glioma and other hard to reach tumors are likely targets. The approach also may have potential, as primary or adjunctive therapy, for non-tumor-related neurodegenerative disorders, particular those that may involve multiple genes such as Alzheimer’s disease and Parkinson’s disease. Peruzzi added, “This approach in which we can regulate a lot of genes at once is very inviting.”