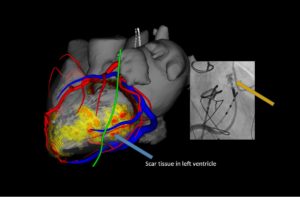 Catheter ablation has become an important therapy for patients with ventricular tachycardia (VT). However, it has been a challenge to access arrhythmia sources deep within the heart muscle with the use of conventional approaches.

Brigham and Women’s Hospital is one of three hospitals in the United States using an investigational needle catheter to treat patients with VT who have failed medications and standard ablation techniques. The experimental irrigated needle catheter is being used under an Investigational Device Exemption (IDE) from the FDA.

“The needle catheter is guided to the arrhythmia source using a sophisticated mapping system, which allows us to visualize electrical signals in the thick lower chambers of the heart,” said Usha B. Tedrow, MD, MS, Director of Clinical Cardiac Electrophysiology Program, and a specialist in VT catheter ablations within the Cardiac Arrhythmia Service at the Brigham.

The Cardiac Arrhythmia Service at the Brigham has received referrals from cardiologists and electrophysiologists across the US and outside the country. To date, Dr. Tedrow and colleagues have performed investigational VT catheter ablations in about 40 patients. Two-thirds have shown long-term improvement after six months. Results from this investigation have been accepted for publication in a 2019 issue of the Journal of the American College of Cardiology.

“In previous studies, this patient population has had startlingly high procedural morbidity with standard ablation, as well as very poor long-term outcomes, despite our best available therapies. Many of these patients couldn’t survive to receive a heart transplant. VT ablation represents a significant step forward in the treatment of these patients, many of whom have had no treatment options,” said Dr. Tedrow.

“The Brigham has all the right players to offer this cutting-edge procedure. These patients are often very sick, so you need a strong heart failure group with strong cardiac surgery and transplant teams. You also need a strong cardiac anesthesia team as well as specialized nursing,” said Dr. Tedrow.

Dr. Tedrow learned VT ablation from William G. Stevenson, MD, who pioneered the technique in the 90s and invented the investigational needle catheter.

In May of 2018, Dr. Tedrow and several colleagues, including Paul C. Zei, MD, PhD, Thomas Michael Tadros, MD, Bruce Andrew Koplan, MD, and Sunil Kapur, MD, performed a live demonstration of VT ablation and other procedures at the Heart Rhythm Society national meeting in Boston. (The demonstration along with a presentation of data is available for purchase from the Heart Rhythm Society).