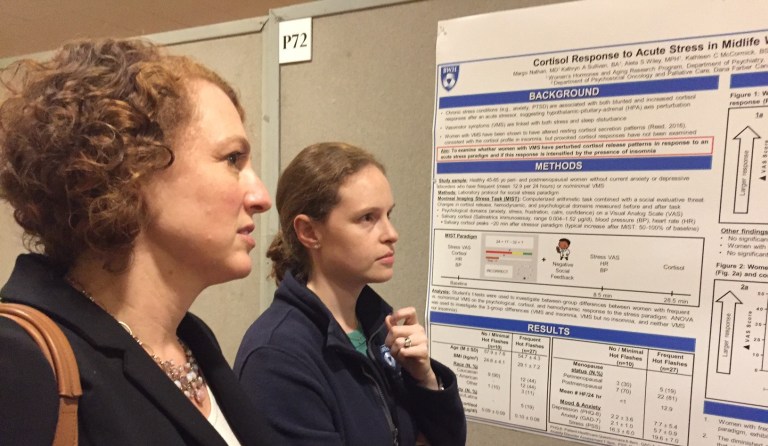 Perimenopausal mood changes and depression are experienced in some form by about one-fourth of women undergoing the transition to menopause. Yet until recently, there was no formal direction for healthcare providers in identifying and treating this condition. That changed in September 2018, when a panel led by the National Network of Depression Centers with the support of the North American Menopause Society published the first-ever guidelines.

“The three main hormonally linked mood conditions in women are postpartum depression (PPD), premenstrual syndrome (PMS) and perimenopausal depression,” said Hadine Joffe, MD, MSc, a psychiatrist and executive director of the Connors Center for Women’s Health and Gender Biology and vice chair of psychiatry research in the Department of Psychiatry at Brigham and Women’s Hospital. Dr. Joffe also served on the task force that developed the new guidelines. “PPD and PMS have been well-studied, but much less is known about perimenopausal depression than the other two,” she added. “Until now, there hasn’t been any guidance for clinicians in recognizing this as a vulnerable period in a woman’s life.”

Dr. Joffe explained that one reason for difficulty in identifying perimenopausal depression is that the period of risk usually stretches over several years and may not be immediately recognized, in comparison to a regular, cyclical event such as PMS or the distinct experience of giving birth. “Perimenopause is more nebulous,” said Dr. Joffe, who also is director of the Women’s Hormone and Aging Research Program. “Perimenopause lasts on average about four years. It’s hard to be able to pinpoint depression that arises during this time and say, ‘Aha, this is definitely hormonally linked.'”

Dr. Joffe’s research focuses on whether perimenopausal depression is a result of changes in reproductive hormones and/or common menopause symptoms such as hot flashes and insomnia. She also studies how to treat menopause-related symptoms, including the efficacy of hormonal and nonhormonal interventions for this constellation of symptoms. Last year, she co-authored the JAMA Psychiatry editorial, Should Hormone Therapy Be Used to Prevent Depressive Symptoms During the Menopause Transition?

The new guidelines for perimenopausal depression aim to help by providing information for healthcare providers. They focused on five main areas:

As members of the Brigham’s Women’s Mental Health Division, Dr. Joffe and colleagues focus on addressing the needs of women with depression and other mental health problems related to pregnancy, postpartum, PMS, perimenopause and other hormonal changes. These guidelines will be incorporated into their clinical practices and their teaching of medical students and psychiatry residents, many of whom are interested in women’s mental health and seek this expert knowledge for their future practices.

This Brigham team also trains others through a one-year dedicated Women’s Mental Health Fellowship. Working with Dr. Joffe, trainees are taught to recognize and treat perimenopausal depression. This training is part of a unique fellowship that provides highly expert and comprehensive training across the field of women’s mental health. Dr. Joffe also lectures on the topic at national meetings and local continuing medical education courses.

The most common symptoms of perimenopause are hot flashes and sleeping difficulties — not depression. But Dr. Joffe’s research has shown that women who experience the former issues are more susceptible to developing mild symptoms of depression, especially because lack of sleep can contribute to mood disorders.

Most women with mood changes during perimenopause have milder symptoms that do not constitute a full-blown mood disorder episode. However, a smaller group develops major depression during perimenopause. Those women generally have a history of depression, Dr. Joffe said. For these women, she added, it’s important to recognize perimenopause as a period of vulnerability for recurrence. Furthermore, physicians who treat these patients should monitor them more closely during perimenopause and should be careful about withdrawing treatment when women may be more vulnerable.

Dr. Joffe emphasized another important reason for creating guidelines: offering relief for those who are suffering. “The good news is that this condition is hugely treatable, once we recognize that it’s happening. It’s also important to recognize that this is a limited period of vulnerability and that the need for treatment passes once the woman passes through menopause and all the hormone changes settle down in postmenopause.”

For mild depression that is related to the hot flashes and sleep problems caused by hormone fluctuations, the task force noted that hormone therapy may be a beneficial approach for many women, particularly those with concomitant vasomotor symptoms, although estrogen therapy is not approved for this use. “If the depression is more severe or a recurrence of an earlier incident of depression,” Dr. Joffe concluded, “the best treatment is likely to be more traditional approaches, such as antidepressants and psychotherapy.”