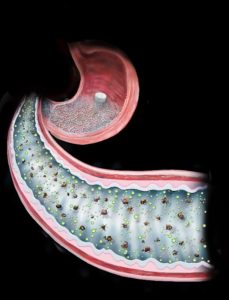 Over the past decade, gastric bypass surgery has been proven to reverse not only obesity but also type 2 diabetes in patients with both conditions. However, most diabetic patients do not meet current surgery criteria. And of those who do, fewer than two percent actually proceed due to concerns about risks.

Investigators at Brigham and Women’s Hospital have spent nearly a decade working on a less invasive but equally effective treatment for reversing type 2 diabetes. In a paper published in the June 2018 Nature Materials, the team reported on results of a preclinical study in which an oral agent was administered in rats to deliver a substance that could temporarily coat the intestine to prevent nutrient contact with the lining in the proximal bowel and avoid post-meal spikes in blood sugar.

“By offering a pill that can capture the benefits of gastric bypass without the risks, we believe we’ll be able to deliver therapy to a much larger cohort of patients,” said Ali Tavakkoli, MD, co-director of the Center for Weight Management and Metabolic Surgery at the Brigham.

This effort began with research Dr. Tavakkoli conducted using animal models to understand the mechanism behind the antidiabetic effects of gastric bypass. He found that following the surgery, isolation of the proximal bowel from nutrient flow was an important step in realizing these effects.

Dr. Tavakkoli later teamed with bioengineer Jeffrey M. Karp, PhD, and materials scientist Yuhan Lee, PhD, of the Brigham’s Division of Engineering in Medicine in an attempt to replicate the effects of surgery through a nonsurgical solution. Together, they searched for a starting material that would have just the right properties to adhere to the small intestine and then dissolve within hours.

The researchers selected sucralfate, an FDA-approved drug used to treat ulcers. They then engineered the substance into a compound called LuCI (short for “LUminal Coating of the Intestine”), a dried powder that can be taken as a pill or capsule. After being ingested, LuCI forms a viscus, sticky paste that coats the intestinal lining without requiring activation by gastric acid. The coating clears out from the gut after a few hours.

Dr. Tavakkoli noted that the transient nature of LuCI is critical. “Some patients who have gastric bypass develop long-term nutritional deficiencies because the bowel is isolated and no longer absorbs micronutrients and vitamins such as iron, calcium and vitamins D and B12,” he said. “Since the coating created with LuCI is only transient, the risk of developing nutrient deficiencies seen after bariatric surgery is anticipated to be much less. Furthermore, since there is no systemic absorption of this drug, the risk of systemic side effects is minimal.”

After a meal, blood sugar levels rise and can stay elevated over time. In their study, Dr. Tavakkoli and his colleagues found that one hour after LuCI was administered to rats, the response to glucose was lowered by 47 percent. They also found this response was temporary and that the effect essentially disappeared after three hours.

The team is now testing the effect of short- and long-term use of LuCI in diabetic and obese rodent models. “We’re focusing on ways to reduce the oral dose of the medication, which will help with eventual patient compliance,” Dr. Tavakkoli said. “We’re also beginning to transition this test to larger animals and eventually to humans.”

Dr. Tavakkoli estimated that testing in humans is one to two years away. “We think the fact that LuCI is based on a drug that has been available for many years and has a very good safety profile — and that there is no systemic absorption — will help expedite this process,” he concluded.