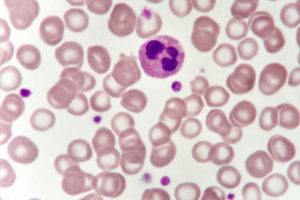 A study by investigators at Brigham and Women’s Hospital that models allergic lung inflammation provides new insight into how neutrophil cytoplasts can contribute to asthma severity. The results may have implications for developing drugs for people with severe asthma.

“Asthmatic patients are not identical. Asthma genetics and clinical characterization of patients have provided evidence for differences that have profoundly affected our approach to clinical care,” said corresponding author Bruce Levy, MD, chief of the Division of Pulmonary and Critical Care Medicine and a leader of The Lung Center at Brigham and Women’s Hospital.

This study sought to clarify the mechanisms that underlie severe asthma and asthmatic inflammation, first by modeling allergic lung inflammation in a dirty indoor environment. The team exposed a mouse model to a common environmental indoor allergen – house dust mite – as well as to endotoxin, a toxin released by bacterial cells that is also commonly found in dust. Exposure to both stimuli triggered complex lung inflammation, including a phenomenon known as lung NETosis.

In response to inflammatory triggers, white blood cells known as neutrophils form “neutrophil extracellular traps” (NETs). NETosis is the process by which NETs are activated and released. NETs can play a significant role in helping defend a host from invaders, but they can also cause organ injury and inflammation. In so-called “vital NETosis” neutrophils extrude their nuclear material, including DNA, to form NETs and then reseal their membranes to create cytoplasts – cells that lack a nucleus. Levy and colleagues found that in their model, NETosis and cytoplasts appeared to play a key role in triggering and amplifying an allergen-initiated neutrophilic immune response in lung inflammation.

To determine whether the work translated to humans, the team examined samples of fluid from the lungs of human severe asthma patients and found that a subset of patients had high neutrophil counts and detectable NETs and cytoplasts – important implications for how to design more precise clinical trials for severe asthma treatment. The results were reported in Science Immunology.

Currently, clinical trials for new drugs to treat moderate and severe asthma do not stratify patients by neutrophil count or other important markers of inflammation. The team notes that markers of NETosis – including NETs and cytoplasts in sputum – may provide an opportunity to better tailor trials and treatments in subsets of asthma patients for future clinical research.  Therapies that have been developed for indications other than asthma potentially could hold promise for the sub-group of asthmatics whose lung inflammation is driven by these mechanisms.

For the many other pulmonary conditions that involve neutrophilic inflammation in the lung, these mechanisms may also play a role, Levy noted. “We saw this with severe asthma, but it’s also likely relevant to pneumonia, acute respiratory distress syndrome and chronic obstructive pulmonary disease, especially those with exacerbations.”