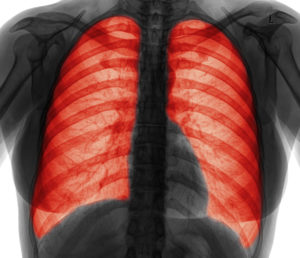 A novel platform is showing the potential for combining artificial intelligence (AI) and CT technology to identify disease stage in people with COPD and predict who are most likely to have acute respiratory disorder events and high mortality.

Pulmonologist George R. Washko, Jr., MD, computer scientist Raúl San José Estépar, PhD, with the Applied Chest Imaging Laboratory at Brigham and Women’s Hospital (BWH) and Harvard University, and their team in the Division of Pulmonary and Critical Care Medicine and Department of Radiology used a montage of chest CT images to train a convolutional neural network to detect COPD, stage its severity, and predict clinical outcomes such as respiratory events and mortality. This technique of “deep learning” or “deep neural networks” (a subset of AI) reflects the ability of computer networks to analyze data that is unlabeled, including from images.

Their research group used scans from 7,983 participants in the National Institutes of Health-funded COPDGene® study as input to train the network to identify those with COPD and to determine their disease stage.

The investigators then evaluated the network’s accuracy by testing its performance in 1,000 non-overlapping COPDGene participants and an unrelated cohort of 1,672 ECLIPSE trial participants. ECLIPSE is a longitudinal study of COPD subjects and a small number of smoking control subjects that were followed regularly for three years, including three chest CT scans. This study has been used for epidemiological analyses and genome-wide association studies.

The study was published online in the American Journal of Respiratory and Critical Care Medicine on Sept. 11, 2017.

“The value of the approach is its potential for risk assessment and early intervention for individuals and entire populations across a range of conditions in pulmonary medicine and beyond, note the researchers.

“This illustrates use of a very flexible approach for all lung imaging – but since it is a disease-agnostic platform, such an approach can be applied across all imaging modalities and any organ system. We focused on COPD to illustrate its use in the respiratory space,” says Dr. Washko. “Knowledge that you have the disease improves patient care with early intervention and hopefully prevents downstream effects.”

The authors wrote that the “deep learning” approach ultimately “may provide a more standardized approach to image analysis and risk assessment across research and clinical care networks.”