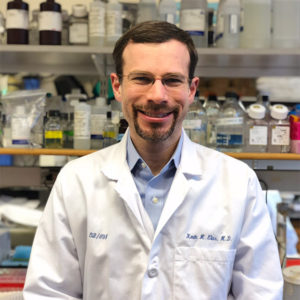 With the help of artificial intelligence, researchers from Brigham and Women’s Hospital (BWH) and Dana-Farber Cancer Institute (DFCI) have developed an early diagnostic tool for ovarian cancer that shows equal sensitivity but far fewer false positives than previous testing strategies.

The research focused on microRNA. Unlike other types of RNA, microRNAs can leave the cell and circulate in blood, making detection from a serum sample possible. Using serum samples from 405 women who were awaiting surgery for a range of gynecological conditions, researchers turned to an advanced computer algorithm to identify a network of microRNAs that could predict the presence of ovarian cancer.

“When we train a computer to find the best microRNA model, it’s a bit like identifying constellations in the night sky. At first, there are just lots of bright dots, but once you find a pattern, wherever you are in the world, you can pick it out,” said Kevin Elias, MD, of the Department of Obstetrics, Gynecology and Reproductive Biology at BWH and lead author of the study, published in eLife.

The team then tested the pattern on independent groups of women and previously published data sets. When the computer program predicted ovarian cancer, it was correct more than 90 percent of the time. Similarly, a negative test reflected absence of cancer about 80 percent of the time, which is comparable to the accuracy of a Pap smear test.  The test was equally accurate for early or late stage disease and in premenopausal as well as postmenopausal women.

“The key is that this test is very unlikely to misdiagnose ovarian cancer and give a positive signal when there is no malignant tumor,” said collaborator Dipanjan Chowdhury, PhD, chief of the Division of Radiation and Genomic Stability at DFCI.

To move the diagnostic tool out of the lab and into the clinic, the researchers will examine serial patient samples to determine how the microRNAs change over time. Brigham and Women’s, which has one of the largest ovarian cancer programs in the US, is particularly well-positioned for this work, due to the large Partners HealthCare Biobank which contains consented samples of serum, DNA and other patient information. The next study likely will focus on women who are at high genetic risk of the disease.

Since the early study was published in eLife in late 2017, Dr. Elias has heard from interested advocacy groups, relatives of ovarian cancer patients, and physicians. “A lot of women with BRCA1 or BRCA2 mutations, especially those who are young, want something to help them make the decision when to have their ovaries removed,” he says. “Many want a more accurate test.”