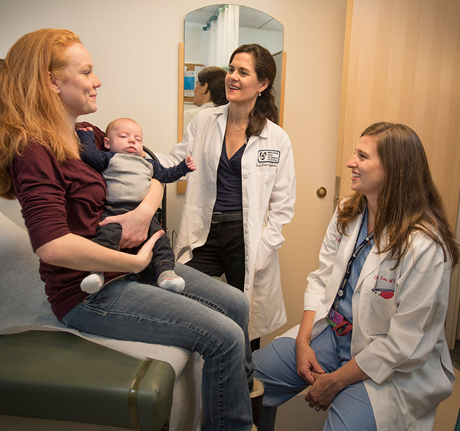 Investigators from Brigham and Women’s Hospital (BWH) have found that despite having access to health insurance, publicly insured pregnant women are less likely than privately insured women to receive a preconception consultation, an intervention proven to improve pregnancy outcomes. These finding appeared in the November 2017 issue of Obstetrics and Gynecology.

“We chose 2006 to 2011, because this was a time period after the expansion of medical care in Massachusetts, so in theory all of these women had access to medical care prior to pregnancy,” says senior author Chloe A. Zera, MD, MPH, a maternal-fetal medicine specialist in the Department of Obstetrics, Gynecology, and Reproductive Biology at BWH, Director of the Pregnancy in Diabetes Program, and senior author on the paper.

The first author on the paper, Sarah Rae Easter, MD, a fellow in Department of Obstetrics, Gynecology and Reproductive Biology, initiated the investigation while still a resident interested in quality improvement. She and Dr. Zera were prompted to investigate the relationship between health insurance, preconception care and pregnancy outcomes in women with diabetes after observing poor outcomes among patients with socioeconomic barriers to care.

“Oftentimes, pregnancy is the first time these patients engage with the health care system. Many of these women haven’t seen a doctor in a year or two and they can come in with uncontrolled diabetes. Preconception health is incredibly important for women with diabetes and determines their risk for poor outcomes, specifically for congenital anomalies,” says Dr. Zera.

“The main finding of our study was that women with diabetes who were publicly insured through Medicaid were much more likely to enter into pregnancy with their diabetes poorly controlled compared to women who were privately insured. If we use Medicaid as a marker for poverty, these results suggest that poverty drives disparities in preconception health,” says Dr. Zera.

Improving the use of preconception care among publicly insured women with diabetes is critical to reducing disparities in pregnancy outcomes, says Dr. Zera. She believes this study highlights the need to make systems-level improvements, not just individual care improvements.

“I hope these findings are a call to action for women’s health providers, especially Medicaid providers, to develop systems identifying and targeting reproductive age women to improve health prior to pregnancy,” says Dr. Zera.